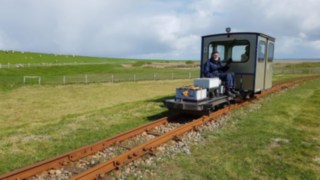 Diesel-powered trolley trains have been chugging across the Lorendamm embankment on the Halligen island of Nordstrandischmoor since the 1930s. Nowadays, the residents use these compact rail vehicles for private transport, and one of them has now been converted to an electric motor with the help of the e-mobility specialists from Linde eMotion.

When the residents of Nordstrandischmoor want to do their weekly shopping or pick up their holiday guests from the mainland the journey can somewhat bumpy and smoky. This is because they use a narrow-gage railway instead of a car to get around this small island in the middle of the Schleswig-Holstein mudflats. Even at the start of the 20th century, this Halligen island was still largely isolated until it was connected to the mainland in 1934 via a causeway at Cecilienkoog. A light railway with a 600-millimeter gage runs across the dam, which was formerly used to transport building materials to the island. 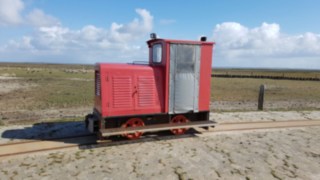 Today, the line is operated by the Schleswig-Holstein State Office for Coastal Protection, National Park and Marine Protection, which regularly runs work trains on the route. The railway is also used by the approximately 20 residents of Nordstrandischmoor. Each household has its own “draisine”, or light rail vehicle, which the residents are allowed to use on the line.

Traditionally, the vehicles are powered using diesel combustion engines. While this does lend the railway a quaint and authentic feel, there is one flaw: Nordstrandischmoor is surrounded by the Schleswig-Holstein Wadden Sea National Park, so many people are asking if there might be an environmentally friendly alternative to the CO2-heavy engines. And, in fact, there are. And it is electric.

At the start of 2019, Halligen residents Gerd-Walter and Thore Siefert,together with engineering firm Reck Elektrofahrzeuge from Ober-Ramstadt, set about fitting one of the private light rail vehicles on the island with a modern electric motor. “The electric motor has many advantages for the trolley train,” explain the project’s initiators. “The e-motor makes the vehicle quieter and more environmentally friendly. Besides that, there is no risk of diesel leakages. All this makes it much better suited to traveling through a national park.” 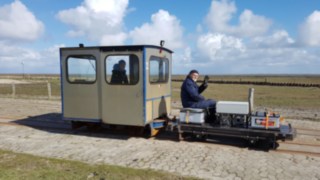 In collaboration with the engineering firm Reck, the engineers from Linde eMotion decided to fit the vehicle with an electric motor, which originally served an entirely different purpose. “Before its time as a light-railway drive, it was used as a pump motor in a now-discontinued range of Linde electric forklift trucks,” explains Sandra Hans who is overseeing the project in her capacity as Application Engineer at Linde eMotion.

For its new role, the former forklift motor needs one thing above all else: ample power. “A crucial factor when selecting the motor was that the trolley regularly needs to run in strong headwinds and still has a relatively large windage. This is why we decided to build a larger motor. The remaining components were then determined from the specified battery voltage and the motor selected,” explains Sandra Hans. 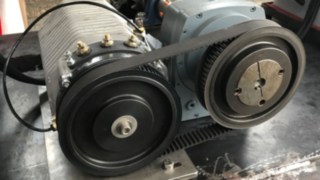 Everything but the Battery

Once a suitable motor had been chosen, the project team added further Linde components to the trolley train’s e-drive. “In this case, we put together the entire electric drive apart from the battery, i.e. the central electrics with vehicle contactor, charging circuit, fuses, relay, as well as the drive control system with joystick and a charge indicator for the battery,” recalls Sandra Hans.

In order to perfectly tailor the drive to the trolley train, the engineers from Linde eMotion made some small changes to the vehicle’s control software. For example, they added a function that stops the vehicle from moving off when a charging plug is connected. The light railway’s battery is designed for a range of 24 kilometers. Under normal conditions, this means the roughly four-kilometer trip from the mainland to the island can be made six times. 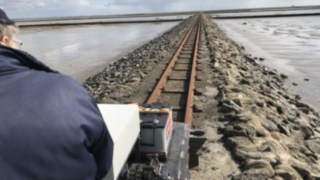 Keeping the new electric motor running shouldn’t be a huge problem for Gerd-Walter and Thore Siefert, according to Sandra Hans: “Since electric motors are generally maintenance-free, we are not anticipating any great maintenance costs.” For safety reasons, Linde is installing diagnostic software “cOdi” on the vehicle owners’ PCs in order to detect any errors in the drive control system and carry out diagnostics on the relevant signals from the system.

As of yet, only one of the trolley trains has been converted from diesel to electric, but that may be about to change: “The light rail vehicle that has just been converted for Nordstrandischmoor is only a prototype for now,” says Hans. “That said, since there are a total of twelve of these trolley trains in use on the Halligen Islands, there is a good chance that more combustion engines will be replaced with our electric drive in the future.”

Would you like to know more about Linde eMotion? Please feel free to get in touch! 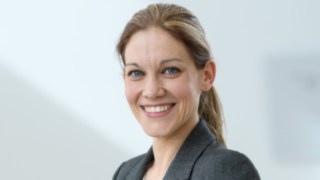